What is GIT?
GIT is a distributed version control system for tracking changes in source code during any development. Here each developer has their code on their local system. Whenever they want they can push the code into Github or Git Server
SVN and GIT SVN is a centralised repository. Everyone use to connect to central repo and code there. If there is any network issue between server and client, developers cannot do anything using SVN.
What are the areas or stages in GIT? 1. Workspace Area : What ever files we add/create are initially in the Workspace Area. 2. Staging/Index Area (git add) 3. Local Repository (git commit -m)
4. Remote (git push) 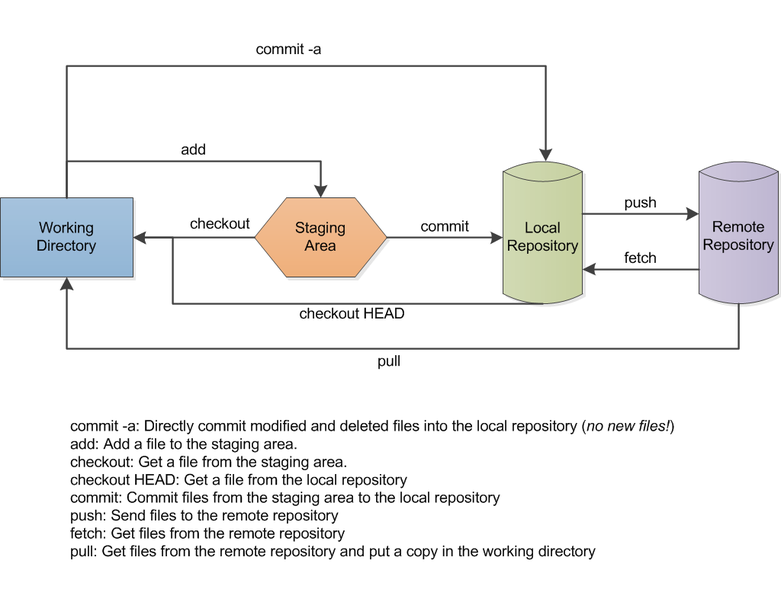 GIT PUSH ISSUES:
permission Denied to push:
1. change git remote using: git remote add origin git@github.com:vjrid8/atozit.in.git
2. If there are any previous wrong git remote URLs, remove them using: git remote rm
3. Now generate the key pair on your system using ssh-keygen -t rsa and this will create a key pair like id_rsa and id_rsa.pub in your ~/.ssh folder. copy contents of id_rsa.pub and paste them in the SSH and GPG keys section on your github account by clicking new SSH key.
4. Now you will be able to push the code to github.com

GITIGNORE:
How to ignore files in the git working directory from git?
create a file in working directory with name ".gitignore" and add the files to it.
.gitignore file will ignore blank lines in it and comments can be added by prefixing # in the file
include files that you want to ignore line by line as below:
file1.txt
*.txt
!project.txt => exception from *.txt to leave this project.txt
folder/