A Pod is a Kubernetes abstraction that represents a group of one or more application containers (such as Docker or rkt), and some shared resources for those containers. Those resources include:

* Containers should only be scheduled together in a single Pod if they are tightly coupled and need to share resources such as disk.
Nodes:
A Pod always runs on a Node. A Node is a worker machine in Kubernetes and may be either a virtual or a physical machine, depending on the cluster. Each Node is managed by the Master. A Node can have multiple pods, and the Kubernetes master automatically handles scheduling the pods across the Nodes in the cluster. The Master's automatic scheduling takes into account the available resources on each Node.

Every Kubernetes Node runs at least: 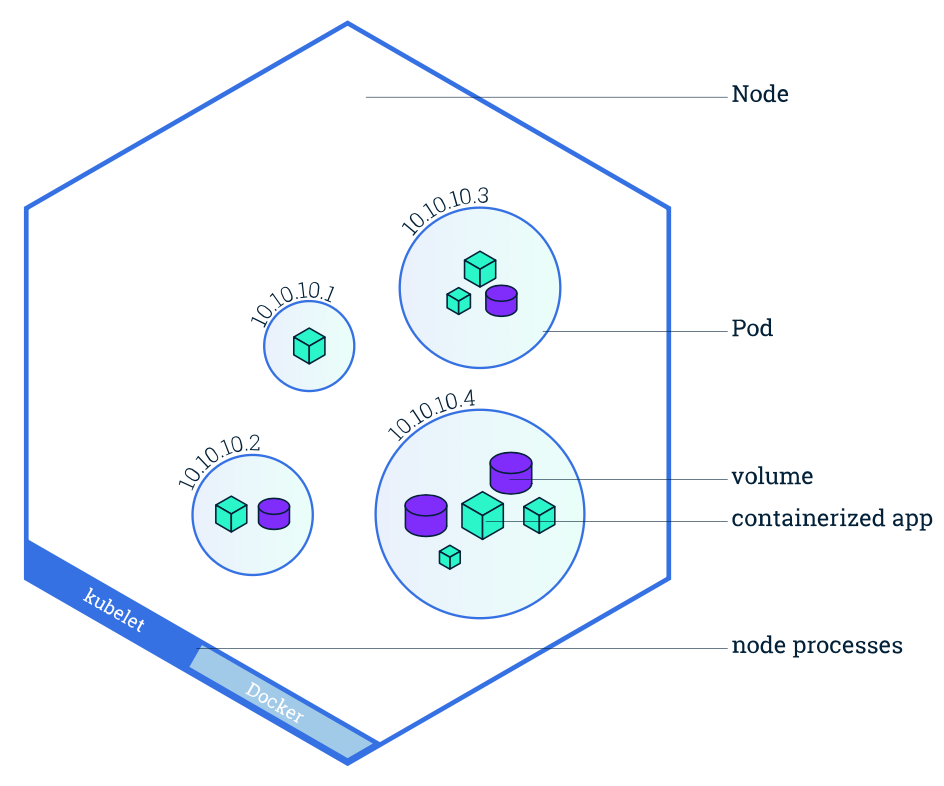 Practice the above command here!

Lab1: Installation of Kubernetes on CentOS 7
On the Master Node following components will be installed
API Server  – It provides kubernetes API using Json / Yaml over http and it stores states of API objects in etcd
Scheduler  – Schedules tasks such as container launching on available nodes by checking resources on them
Controller Manager – Monitors and make sure pods state as per configuration.
etcd – It is a Key value pair data base. It stores configuration data of cluster and cluster state.
Kubectl utility – It is a command line utility which connects to API Server on port 6443 and is used create pods, services..etc.
On Worker Nodes following components will be installed
Kubelet – It is an agent which runs on every worker node, it connects to docker  and takes care of creating, starting, deleting containers.
Kube-Proxy – It routes the traffic to appropriate containers based on ip address and port number of the incoming request. In other words we can say it is used for port translation.
Pod – Pod can be defined as a multi-tier or group of containers that are deployed on a single worker node or docker host.

Issues encountered during kubeadm init:
1. swap should be off. Get this using #swapoff -a
2. No.of CPU's must be 2 or more. Increase no.of CPU's to 2 in VM Settings
3. [ERROR FileContent--proc-sys-net-ipv4-ip_forward]: /proc/sys/net/ipv4/ip_forward contents are not set to 1

4. If kubectl is unable to connect on port 6643, use #swapoff -a and #systemctl restart kubelet
5. You can also use to troubleshoot kubectl service: #journalctl -xeu kubelet
6. Some commands:

KUBECTL: kubectl is a command line interface for running commands against kubernetes clusters. kubectl looks for a file located at $HOME/.kube directory.

EKS - Common Kubernetes Resources
The most common resources you will use in EKS are:
Pod: Smallest deployable unit, it can contain one or more containers
Deployment: The typical way to deploy an app. In a deployment, you define which pod/containers you want, and the number of replicas Services: Services are used to create DNS endpoints in kube-dns, it gives us a similar functionality to consul
Ingress: An ingress rule is meant to be used by an ingress controller (like traefik) to help it decide how to act upon a request. Example, you can define an ingress path based ingress rule that send all /v1/gaia requests to the gaia service (see above)
ConfigMap: A configmap allows us to create configuration files and mount them in a pod. An example of this would be logback.xml, you can create a configMap with logback.xml and mount it in the pod. Since the configMap is a Kubernetes object, it's not necessary to have that file in the host itself (understand mounting to the pod VS mounting to the host)
Job: A task that is supposed to run only once
CronJob: A scheduled task, similar to Chronos in the Mesos world
Secret: Similar to configMaps, but these are encrypted and are mounted at pod run-time
Namespaces: Allows us to separate workloads. In practice, it's used as an environment
EKS - How to add Private Docker Repo Credentials
In order for pods to be able to download docker images from our private docker image repo, you need 2 things:
Define a secret containing the credentials
$ kubectl create secret docker-registry regcred --docker-server=<repo
url> --docker-username=<user> --docker-password=<password>
--docker-email=<email>
Make sure your pod template spec includes
imagePullSecrets:
- name: regcred
EKS - Common Commands
This wiki is meant to show the most typical commands you will use when communicating with Kubernetes or Helm
Kubernetes commands
A very useful command is "get", which is used to provide a list of a specific resource in Kubernetes. The most common resource types in kubernetes are:
In order to get a list of any of these, use the following command syntax:
$kubectl get <resource> -n <namespace>
As a note, namespace = environment(like Dev, Prod,Stage)
A couple of examples:
$kubectl get pods -n dev => get pods in dev namespace
$kubectl get svcs -n dev => get services in dev namespace
Install a Helm Chart:
$helm_ install <helm chart> --version <chart version> --name <release name> --namespace <environment>
ex:$helm_ install zt-default\gaia --version=0.9.1-fdszdsadersdfxghdsdaz --name=gaia-dev --namespace=dev
Upgrade a chart, Install if its not there
Syntax:helm_ upgrade --install <relase name> <Helm Chart> --version=<chart version> --namespace=<environment>
ex:$helm_ upgrade --install gaia-dev zt-default\gaia --version=0.9.1-fdszdsadersdfxghdsdaz --namespace=dev
Get available revisions for a given release
helm_ history <release name> <revision>
ex:helm_ history abacus-daily-metrics-dev
Do a roll-back
helm_ rollback <release name> <revision>
ex: helm_ rollback gaia-dev 2